Pakistan’s climate disaster is a warning of future disasters

Pakistan’s climate disaster is a warning of future disasters

According to a report in Islamabad/Kathmandu on October 28, 2022:

“Many of Pakistan’s children are suffering under the impact of the catastrophic climate disaster, with the most vulnerable children suffering the most.”

“I have seen children who have lost everything: schoolbooks, loved ones, their only homes, their schools, and their sense of security.

The lives of nearly ten million children are in immediate danger. The number of deaths has already reached hundreds. Malnutrition is a serious health problem that affects one-of-nine children here – a condition that can result in death. Families are in panic mode, searching for food to feed their children.

During the floods, a woman named Farida fled with her five children from her beloved home in Sohbatpur, Balochistan. One of her daughters, Rasheeda, one-year-old and severely malnourished, worried her sick.

“Their story is just one of millions. It is inevitable that vulnerable children will continue to suffer from diseases that are preventable and treatable in normal times as winter approaches.

It is imperative that we support the children of Pakistan so that they can survive. Despite this, Pakistan’s international plead remains severely hampered by insufficient funding. Unless international support is provided to scale up interventions, hundreds more children will die in the coming weeks.

There is no doubt that Pakistan is not the only country suffering from climate devastation.

Over 15 million children are in need of assistance because of floods caused by climate change in Pakistan, Bangladesh, India, and Afghanistan alone in 2022.

Temperatures have risen to 48 degrees in the crowded cities of the region during extreme heatwaves. While glaciers continue to melt in Pakistan and Bhutan, landslides have destroyed children’s homes in Nepal, and rising sea levels threaten Maldives’ existence.

Boys and girls rely so heavily on water, sanitation and hygiene, health and education services provided by governments. In a climate-changed world, every boy and girl must also have the skills and knowledge to survive and thrive.

Nevertheless, global leaders must take urgent action to limit global warming to 1.5 degrees Celsius. Only this can save the lives of children.

If there is no urgent global action. The catastrophe we’ve seen in Pakistan, I fear, is only the beginning of many more child survival catastrophes to come. 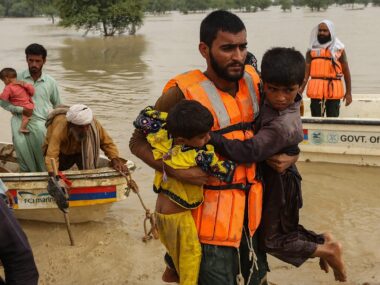